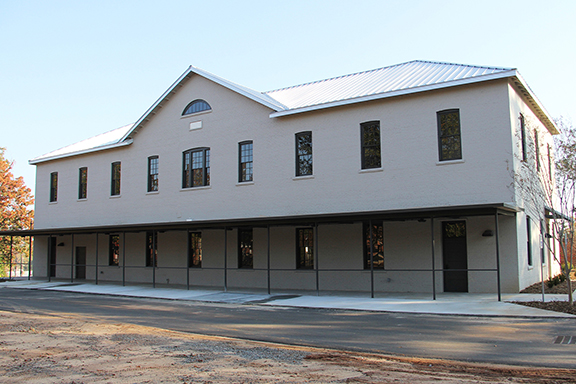 Prior to the construction of Parker Annex in 1910, the southeast corner of the SC State Hospital property served as a prisoner of war (POW) camp for Union military officers from October 1864 – February 1865 (Camp Asylum). In 2014, a team of archaeologists from the University of South Carolina’s Institute of Archaeology and Anthropology (SCIAA) conducted excavations on the property. These excavations revealed nine pits, referred to as “shebangs” by archaeologists. The shebangs were barely large enough for one man to curl into. They served as the only places on the property where POWs could escape the harsh winter months. It is believed that there would have been hundreds of these pits across what is now the BullStreet District. Privies and other features created during the property’s history as a POW camp could reveal more about the people who lived here during the Civil War, including those seeking refuge following the Burning of Columbia.

Parker Annex was constructed in 1910 to relieve overcrowding of African-American male patients housed in the Parker Building (constructed 1898, demolished 1981). Both buildings were named after John Waring Parker, M.D. In December 1836, Dr. Parker became the first paid assistant physician of the South Carolina Lunatic Asylum. He was also named superintendent - the fourth in the first eight years of the asylum’s life and the first who was a physician. He was removed from both positions by the Reconstruction government in 1870, and was replaced by Joshua F. Ensor, M.D. Dr. Parker was recalled by Dr. Ensor as an assistant physician in 1876, a position he held until his death in 1882.

In 2010, Hughes Development Corporation (HDC) contracted to purchase 165 acres of the state mental health campus on Bull Street. HDC acquired all portions of the property by 2016. In 2014, Diversified Development, Inc. purchased Parker Annex from HDC and restored the building. In 2017, Parker Annex was leased by the South Carolina Department of Natural Resources (SCDNR) for its Cultural Heritage Trust Program. Interior renovations were completed by SCDNR, and Parker Annex was renamed Parker Annex Archaeology Center to highlight the property’s cultural history and future use.