In 1996, at the Society for American Archaeology (SAA) Annual Meeting in New Orleans, the Public Education Committee's Archaeology Week and Network Subcommittees, along with the SAA's Council of Affiliated Societies, sponsored the first Archaeology Day, Week, or Month poster contest. The State Archaeology Celebration Poster Contest has continued every year since, and this year, South Carolina's poster series with the theme Heritage at Risk was designed by SCDNR Heritage Trust archaeologists Meg Gaillard and Karen Smith, PhD. More information about the State Archaeology Celebration Poster Contest.

Within the Southeastern United States, more than 19,000 recorded archaeological sites will be submerged by the end of the 21st century with a 1-meter rise in sea level. The 2019 South Carolina Archaeology Month Heritage at Risk poster series highlights four sites in South Carolina that are directly impacted – Pockoy Island, Fort Frederick, Spanish Mount and Charleston. Each poster in the series can be downloaded for free and printed on 11” x 17” paper. The bookmark (double-sided) can also be downloaded for free and printed at 2.5” x 8.5”. While supplies last, all four posters in the series and the bookmark are available to pick up for free at Parker Annex Archaeology Center.

Special thanks to Jamie Koelker of Koelker & Associates who provided aerial imagery for the Pockoy Island, Spanish Mount and Fort Frederick posters; photographer Jared Bramblett who provided imagery for the Charleston poster; Katherine Saunders Pemberton of Historic Charleston Foundation for writing the text for the Charleston poster; Tammy Herron of the S.C. Institute of Archaeology and Anthropology for editing the poster series; and Brad Sauls of the South Carolina Department of Archives and History for facilitating the grant funding. 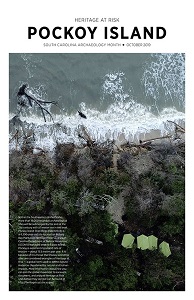 Within the Southeastern United States, more than 19,000 recorded archaeological sites will be submerged by the end of the 21st century with a 1-meter rise in sea level. Pockoy Island Shell Rings (38CH2533) is a 4,300-year-old site located on Botany Bay Plantation Heritage Preserve, a South Carolina Department of Natural Resources (SCDNR) managed area on Edisto Island. Pockoy is experiencing a rapid rate of erosion — about 15.5 meters per year. It is because of this threat that Pockoy and other sites are considered examples of Heritage at Risk — a global term used to define cultural resources threatened by natural and human impacts. 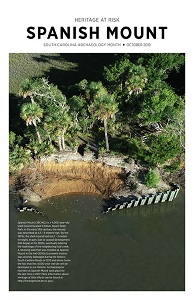 Spanish Mount (38CH62) is a 4,000-year-old shell mound located in Edisto Beach State Park. In the early 19th century, the mound was described as 4.5 - 6 meters high. By the 1970s, the shell mound had lost 1 - 3 meters in height, in part, due to coastal development that began in the 1920s, eventually altering the hydrology of the neighboring tidal creek. A retaining wall that was installed at Spanish Mount in the mid-2000s to prevent erosion was severely damaged during the historic South Carolina floods of 2015 and drove home the fact that this 4,000-year-old site will be destroyed in our lifetime. Archaeological recovery at Spanish Mount took place for the last time in 2017. 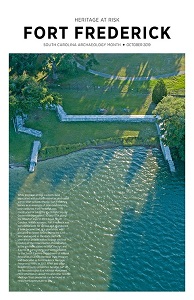 While Heritage at Risk is a term most associated with cultural resources destroyed within short periods of time, Fort Frederick serves as an example of slow deterioration over centuries. Fort Frederick was constructed of tabby by the British Colonial Government between 1730 and 1734 along the Beaufort River in Port Royal, South Carolina. Within six years, Fort Frederick was considered unfit for service and abandoned. It later became part of a plantation, was occupied by Union forces during the Civil War, and served as the dock platform over which people walked to hear the first reading of the Emancipation Proclamation in the southern states. In 1999, the fort and 3-acres of surrounding land were acquired by the South Carolina Department of Natural Resources (SCDNR) Heritage Trust Program and dedicated as Fort Frederick Heritage Preserve (FFHP). In 2017, FFHP and other Beaufort County properties became part of the Reconstruction Era National Monument. 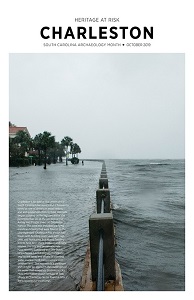 Charleston is located at the center of the South Carolina Lowcountry and is frequently noted as one of America’s most historic and well-preserved cities. In 1680, colonists began building on the high ground of the peninsula that lies at the junction of the Ashley and Cooper rivers on Charleston Harbor. This area also included low lying marsh and creeks that were filled in as the city expanded. Charleston has always had issues with flooding associated with high tides and hurricanes, but recent flooding events have been more frequent and more intense. The city and preservationists have recently partnered with the Dutch https://www.dutchdialoguescharleston.org/ to link ideas and efforts in planning, water management, infrastructure, and development. This represents a paradigm shift in how we approach the challenges of the water that surrounds this historic city. 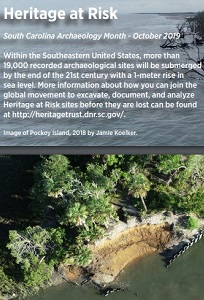 The bookmark (double-sided) can also be downloaded for free and printed at 2.5” x 8.5”.